The Alberta crop sector value chain is working together on a roadmap that promotes a total management strategy aimed at mitigating the spread of Fusarium Graminearum. Our roadmap puts an emphasis on extension and education of best management practices, surveillance and monitoring, and research and development.

How we will get there?

Strategic tactics will guide our path forward with the goal of ensuring you have the resources, information and support you need to manage FHB on your farm while fostering long-term mitigation of FHB in the province.

In July 2018, the Government of Alberta released a farm level economic analysis on the impact of fusarium on wheat in the province. The analysis presented economic cost scenarios for a single farm, as well as attempting to estimate the regional economic impact from fusarium over a time period from 2004 through 2017.

The analysis identified that while farms experienced losses from yield loss due to infection, the most prominent value losses came from infection resulting in lower grade values. Assuming that a farm had a 100% fusarium incidence (meaning fusarium was present in every field), value loses were dependent on the severity of the infection. The analysis found that small increases in severity rapidly led to significant decreases in value, with a 2.2% severity resulting in wheat being graded as feed. Results are listed in the following table sourced from the report. 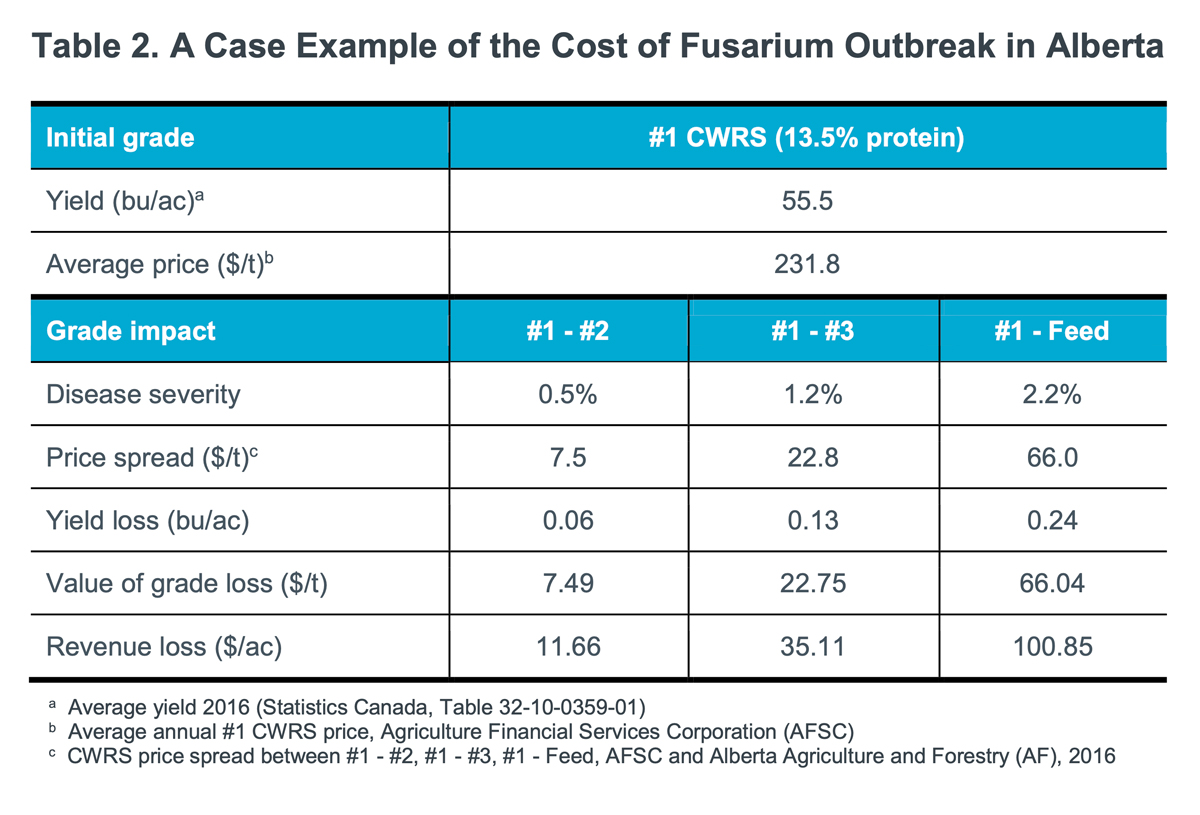 The regional estimates found again that the annual impact of fusarium infection was mainly dependent on the severity of the infection, with the greatest impact coming from wheat being given a lower grade. The analysis presents a comparison between economic costs of downgrades in 2010 and 2012.

“For example, in 2012 a large amount of CWRS production, over 400 thousand tonnes, was downgraded from grade #1 primarily to grade #2, with a very small amount further downgraded to grade #3. Since the price discount is fairly low, the total provincial cost was a modest $3 million. That compares to 2010, where a smaller amount of production was downgraded, but all to grade #3 and to feed wheat at a total cost of about $8.7 million. In 2016, the losses were particularly bad, resulting in downgrading of over 700 thousand tonnes of grade #1 to grades # 2 and #3, with the corresponding economic cost of $12.8 million.” 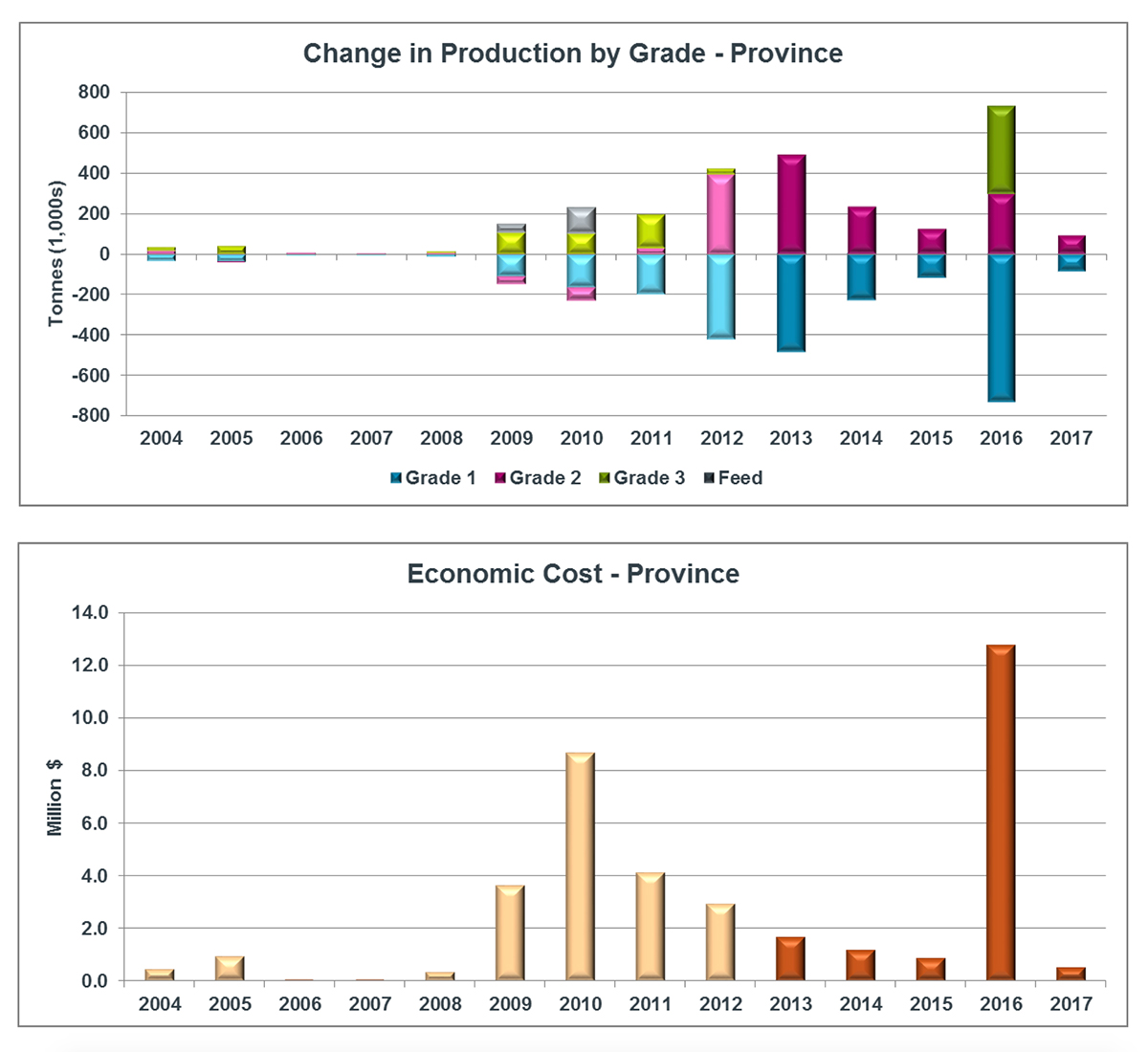 Concerns regarding Fusarium Head Blight come from the mould’s production of mycotoxins. Mycotoxins are secondary metabolites produced by a variety of moulds, and are found on several agricultural commodities under specific environmental conditions. The particular mycotoxin of concern with respect to Fusarium Head Blight is deoxynivalenol (DON), the effects of which has been well documented in humans and animals.

Ingestion of food and feed contaminated with DON can result in vomiting, impaired reproductive function and reduced fertility, and reduced immune function with compromised resistance to infection and disease. Additionally, providing DON contaminated feed to livestock may result in reduced production from reduced animal performance and feed refusal.

There is also risk in human consumption of animal products from livestock fed contaminated feed. There is a potential for the “carry-over” of toxin into animal products, such as milk or meat, destined for human consumption. In addition, the by-products of certain food processes, have the potential for being highly contaminated with certain mycotoxins and may cause severe adverse effects if subsequently fed to a species particularly sensitive to the contaminating mycotoxin or toxins.

It is the well documented concerns to the health of humans and livestock that drive strict testing and inspecting protocols to limit the presence of DON in the food supply. This concern has led to the implementation of limits through regulation and grading of farmer deliveries and contract terms from end use buyers which ensure a minimal presence of DON in the food supply.

Beyond the health impacts, infections due to fusarium head blight through the production of DON can negatively affect the production and end-product quality of bread and pasta. The presence of DON in the wheat kernel results in enzymatic activity that breaks down proteins. This can result in decreased gluten strength (i.e. reduced protein quality), which can negatively impact the baking process. In the image below, flour with decreased gluten strength can result in bread with decreased loaf volume (i.e. height of the loaf), the impact can be seen visually. Millers will remove the infected kernels in order to ensure safety and improve quality, which results in less raw material and lower flour yields. 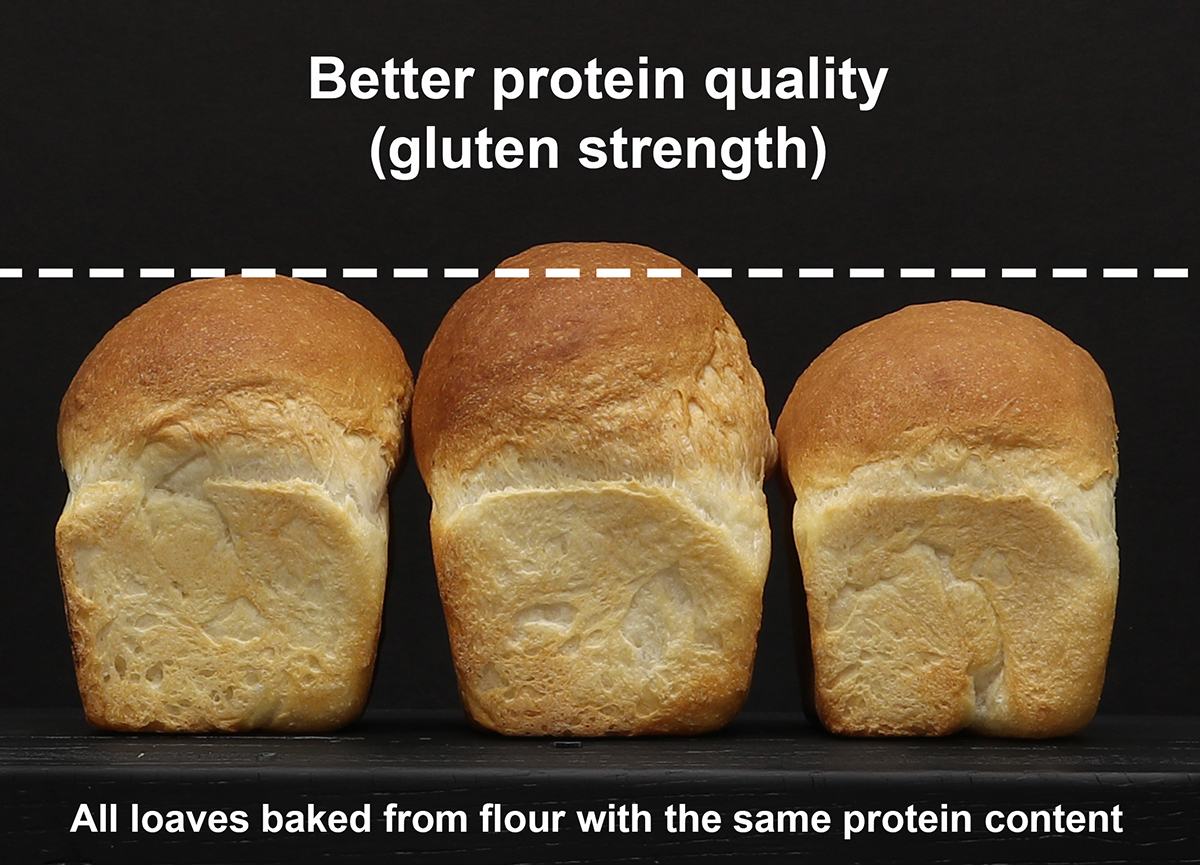 The Canadian Grain Commission sets limits though the grading system on the maximum amount of fusarium damaged kernels that are acceptable for farm deliveries into the grain handling system. These limits vary depending on the class of wheat. The table below provides a quick reference guide pulled from the full grade determinant tables online.

The presence of fusarium head blight is a major concern in malt barley. As malting is designed to start barley sprouting, the malting process create ideal growing conditions for fusarium head blight to grow and multiply. Even small amounts of mold present in raw barley can result in extensive infection by the end of the malting process. This results in malt companies having very low tolerance for fusarium head blight and/or DON in barley. Limits are set by individual buyers and may vary by region and by year. Limits for malt barley can be expected to be near 0.2% fusarium damage visually, or 0.04 parts per million if tested via wet chemistry.

In addition to health concerns, fusarium infection can result in problems to the quality of final products. The presence of DON during the brewing process can result in rapid loss of beer foam when a bottle is opened, a phenomenon known as “Gushing”. Limits for food barley are expected to be near 0.5% fusarium damaged kernels 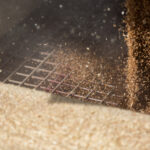 ‘Let’s Manage It!’ is brought to you by the Alberta Wheat and Barley Commissions in collaboration with the industry-led FHB working group which consists of value-chain partners from primary producers to global bioscience companies and other stakeholders.